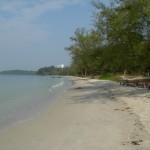 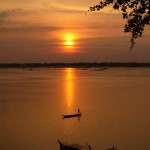 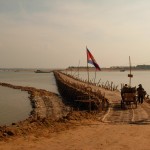 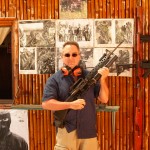 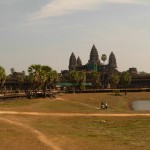 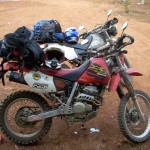 I stopped my motorcycle in the middle of the trail where I knew it would be safe – free of landmines. The trail was well travelled, worn from the foot prints of farmers herding their livestock. I dismounted the motorcycle and took advantage of on of the greatest gifts God had given the human male, the ability to urinate almost anywhere. I did not see my brother who was right behind me before turning off the main road. I did not hear his bike or see any dust clouds. Since I had not heard an explosion I was confident that he had not encountered a landmine. Carefully turning the bike around to search for him, I become concerned as I was carrying the map so he could be lost. As I approached the main road I see his motorcycle off to the side and there is my brother lying in the shade catching some rest, half a sleep. Apparently the trail was too dusty for him as my bike was kicking up large dust clouds. My brother decided to let me go off and have some fun while he took advantage of the time to relax in the shade.

What an adventure we had in Cambodia. On our rented Honda 250cc Baja motorbikes we were able to go wherever we wanted. We went everywhere, the Temples of Ankor, the Killing Fields, the beaches of Sihanoukville, one of the many floating villages on Tonle Sap Lake and to see the fresh water dolphins swimming in the Mekong River near Kratie.

We rented our bikes from Two Wheel Only www.twocambodia.com in Phnom Penh.  Reasonable rates, very well maintained bikes and the owner of the shop, Tony, was very helpful in providing guidance on Cambodia.

Freshwater dolphins – We were fortunate enough to meet a representative from the World Wildlife Fund (WWF) while having lunch in Kratie. We were able to learn a lot about the freshwater dolphins, the issues facing the dolphins and where to see them.  Check out this link  http://wwf.panda.org/who_we_are/wwf_offices/cambodia

This entry was posted in Cambodia - Dec 2009 - Jan 2010, Previous Adventures and tagged Honda. Bookmark the permalink.